My husband and I went to Kansas City for a long weekend in October to visit my dad and run the Kansas City Half Marathon. If you aren’t familiar with KC, it sits on the border of Kansas and Missouri, but the race we did was all on the Missouri side. It was very confusing for someone not living there! One minute you’re driving around in Kansas, the next in Missouri! We couldn’t keep up.

Living in Southern California now, we don’t get much rain. So when my husband and I woke up on race morning to it raining, we were not prepared. The race started in downtown Kansas City, near Union Station.

I honestly couldn’t tell you where it went from there, but the course was nice. We went through more or downtown, what I imagine were some suburbs, and the Jazz district. There were definitely a good bit of hills, but I felt prepared for them. And through it all it rained. For a couple minutes it’d be pouring, then a light rain and back to pouring again. But despite being a weakling from SoCal, I loved it. We fully embraced the rain and jumped in as many puddles as we could! Downside of running in the rain (besides being freeeezing after)? Hair = a literal rats nest.

It was not fun to try to brush that out after.

Overall the race was fun! There was a full marathon too, and as we were driving home after the race, we saw the runners out. The course looked like an out and back for the 2nd half of it. It was in a pretty residential area, but I think I might have gone a little crazy with that out and back.

And my FAVORITE part of any race? The post race meal. Kansas City Joe’s BBQ for the win! Highly recommend this if you are ever in KC. Get the Z-man sandwich and don’t hold back on the fries. I’m drooling just looking at this now.

Do you like or dislike running in the rain?

Race and state #: Encinitas Half Marathon, #9

A lot happened between my last half marathon in 2016 and this one. As a refresher, Jon and I got engaged during the half in June 2016. A couple months after that, in October, we packed up our lives and moved across the country from North Carolina to California. And then, a couple months after that, at the end of June 2017, we got married! It was a whirlwind of travel and planning during that time and for the rest of 2017 as we were there for other friends getting married. Running took a backseat to it all.

So finally, as things settled down, we decided to cross off a race in our new home state!

We signed up and ran the race with some friends, which was just the motivation we needed to get up early and head to the start. We heard from past years that traffic would be crazy, so to avoid it all, we met at our friends house and rode our bikes to the start. I highly recommend this for any half, if you can swing it. It made things so much easier. And bonus: it’s a nice warm up!

Not a bad spot to leave the bikes.

From there we walked to the start, and basically spent the rest of the time waiting in line for the porta potties. When the race finally started, we all went our separate ways. Jon wanted to run a little faster, so he and I split up, and our friends were running their own pace (run a mile, walk a minute) so we split up as well. I definitely didn’t mind running on my own though.

The course was gorgeous! Basically all of it is along the coast, so some great views. It was also a beautiful morning. The sun was out and it started off a little cooler. It definitely warmed up as the race went on, but still nothing like some other runs I’ve had. I didn’t train in this race for any specific time, I just wanted to get back into racing and distance running after over a year of a hiatus. As the race went on though, I realized I was feeling really good and running a pretty quick pace (for me anyway). I kept it up and about halfway through, decided to run with music for the extra little boost. The one thing about the course is that it was pretty hilly, but apparently a lot better than past years, and it was nothing different than what I had trained on, so it was fine.

The last few miles were probably the hardest. They weren’t uphill, but they were in an out and back stretch that was just a little less exciting than the rest of the race. No ocean views?! But, two of our good friends were there to cheer us on at that section, which was much needed!

Towards the end of the race, I realized that at the pace I was going, and with the distance that was left, I could finish in under 2. Realizing that really kicked things into gear for me even more. I didn’t go into this race with any goals, but once I realized it was possible, I was going to make it happen.

I ended up being not too far behind Jon, so we met up at the finish line with my family (they happened to be in town over this weekend which was awesome, we loved having more supporters!).

After everyone finished, we met back up with our friends for a celebratory drink and brunch!

Race and state #: Yellowstone Half Marathon, #8

Of all the races I’ve done, my favorite by far has been the Yellowstone Half Marathon!

In the summer of 2017, Jon and I went to Yellowstone + Grand Teton National Parks with my best friend and her husband. My friend and I have been making it our goal to go to as many national parks together as possible, so it only felt fitting that we finally do a trip with all 4 of us! And once Jon and I found out there was a Yellowstone half marathon, we knew we had to do it.

Leading up to this race was just like any other, though much more difficult to plan for since we were traveling there for more than just a weekend, and for more than just the race. It was also the first time we camped prior to and after a half marathon. For Jon though, it wasn’t just any other race. I had no clue, but he was planning to propose during the race!

The day before the half marathon comes, and it is freezing! Keep in mind it’s June, but June in Yellowstone can mean anything. Even snow.

I was very much not looking forward to getting up and running a half marathon in this. In fact, I was secretly hoping the snow would have canceled it (I really was not wanting to run this race the night before and the morning of). Jon wasn’t about to let us bail though, so we headed to the start.

Luckily the race was at a lower elevation, so they didn’t have any snow. It was definitely still cold and overcast at the start, which didn’t help my motivation, but the morning ended up being gorgeous! The sun came out and it warmed up quite a bit, which was much needed. 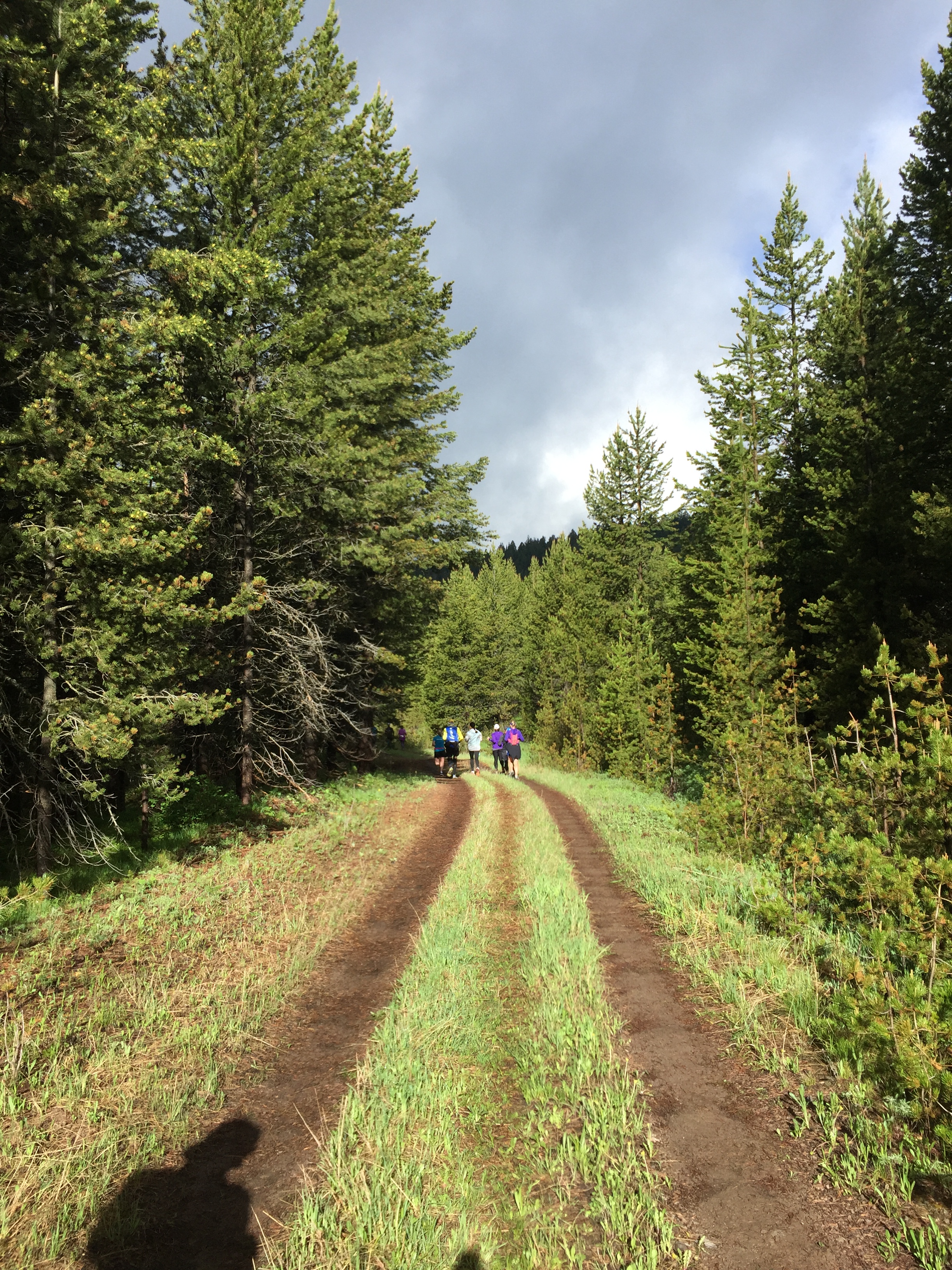 I was struggling in this race. I was not adequately prepared (Jon and I both didn’t do a great job training for this one), so I got exhausted and over it quickly. I kept encouraging Jon to run ahead of me since he’s faster than me, but he kept insisting that he’d stay with me and we’d run it all together. About halfway through, I understood why. Jon suggested we stop off to the side of the path to take a picture together. It’s unlike him to be the one to suggest a picture (normally it’s me) but I went along with it and didn’t suspect anything. We stopped in this little clearing that was off to the side of the race path, and took quite possibly one of the worst pictures of us ever.

But then two seconds later, Jon got down on one knee and asked me to marry him! It was the best proposal and so perfect for us…and clearly we were not worried about our time in this half! 😉

The place that we stopped was gorgeous too!

After this little detour my mood INSTANTLY changed, as you can imagine. I couldn’t stop smiling, I was loving running on the trail and dodging rocks and roots. The trail was also even prettier in the second part of the race, which was just an added bonus. Jon and I couldn’t stop talking for the rest of the race, we were both in such good moods. It was hard not to shout “we’re engaged” at everyone were passed, but somehow I refrained. 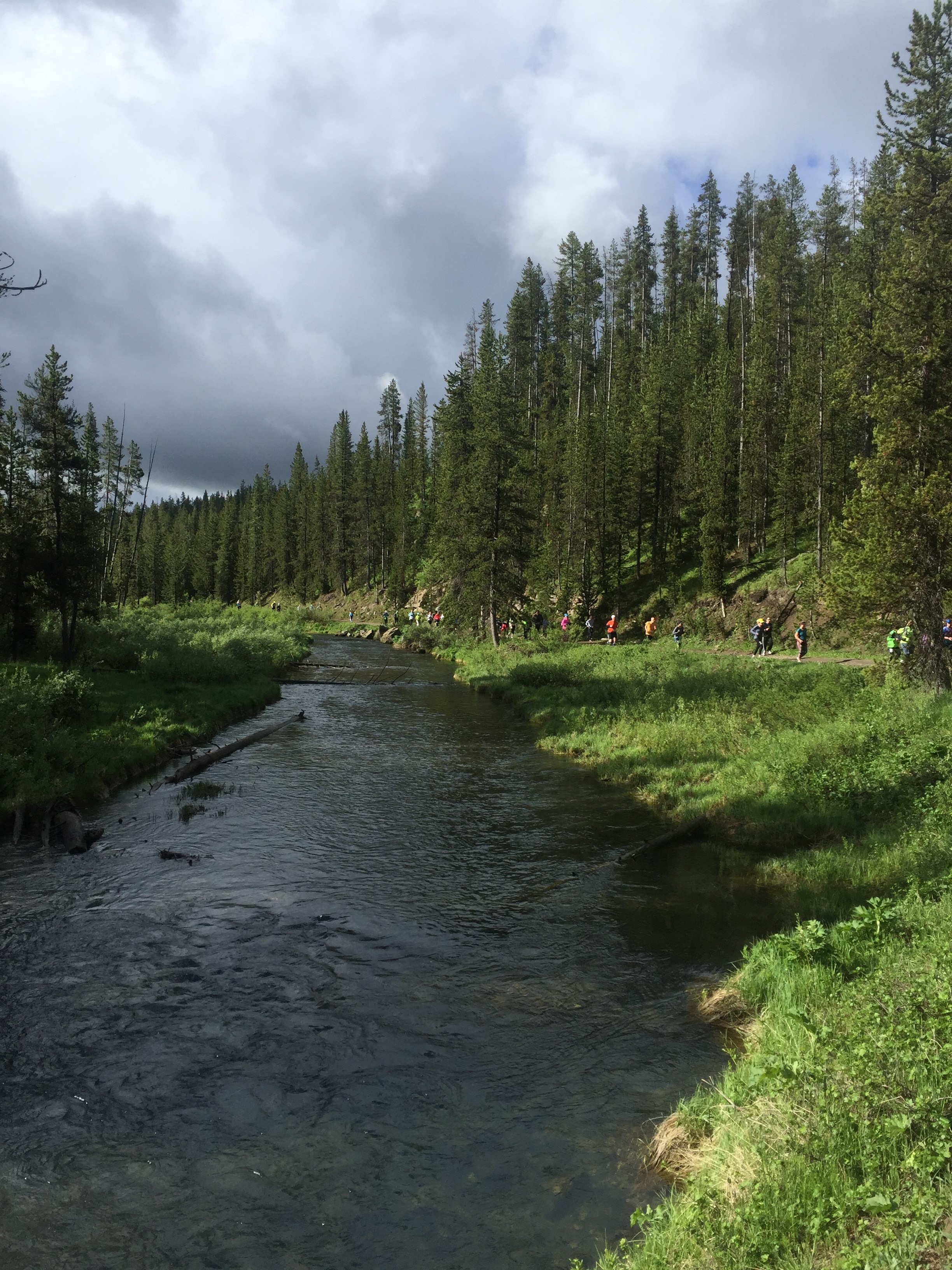 I loved that he proposed in the middle of the race, because it gave us that private time together to just soak it all up before telling everyone else. At the same time, after a couple of miles I was so ready to be at the finish line to tell my best friend and her husband. Jon was very secretive about this proposal, and didn’t tell anyone his plans. The only people that knew anything were our parents, and my best friends husband, who actually forgot, so there was no risk of it leaking to me.

Finally the finish line came and once I saw my friend, I couldn’t contain it anymore.

It took her a while to figure out what I was saying, but eventually she got it 😉

All in all, this race was awesome. The race itself was gorgeous, and definitely a fun trail run with great weather and views. And of course on a personal note, I loved this race!